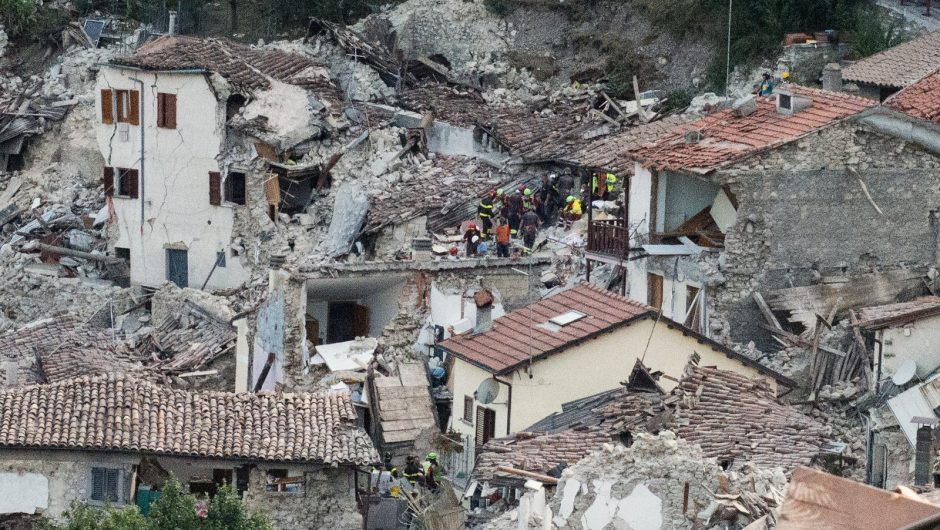 Sustainability and disaster resilience : Time is our life.

On August the 24th, in the deep of the night, a 6.0 magnitude earthquake hit central Italy, an area on Apennine mountains, embracing villages situated in three central regions, Lazio, Umbria and Marche. After 15 days we know that 295 people died and about 400 were injured, right now about 5,000 people are homeless and about 4,700 are hosted in tent camps, others are hosted, by relatives and friends, in other cities. The major number of life losses is concentrated in three main villages, Amatrice, Accumoli and Arcquata del Tronto. Accumoli is the nearest to the epicenter of the earthquake. It’s a tragedy and first of all our condolences go to the families, relatives and friends of the victims hit by this great pain.
The collapse of residential and hospitality buildings is the major cause of death and wounded people. Why so many? Why also just one death? Under the lens of risk evaluation, we know that risk depends on three factors: hazard x vulnerability x exposure.
On the hazard side we know Italy is a seismic territory due to the fact that it’s situated on a boundary between the African and Euro-Asian plate, with the African one that is going to subside under the Euro-Asian plate and consequently with seismic effect on the surface. But only in 2006 all Italian territory was recognized as seismic by law and divided in four degree levels of hazard, from 1 to 4 with decreasing predicted intensity of hazard, based on the same period of return. And only in 2009, the NTC 2008 Italian new building code, has defined for all the country the ways you have to design and construct new buildings considering seismic loads, based on different hazard zones, and the specific cases when you are obliged to make seismic improving on existing buildings. The area of this earthquake is classified 1 as hazard intensity and specific building codes, only for areas like these, were been developed since 1974.
Watching first pictures collected in reports by Reluis, the interuniversity consortium with the purpose to coordinate the University Laboratories activity of seismic engineering, we can say that many collapsed buildings were probably constructed with poor materials and technics, without any consideration on seismic loads. Maybe incorrect renovation practices were put on place also in occasion of small refurbishment works, which did not help buildings to withstand seismic impact, but the main consideration is that the majority of homes were probably constructed before the seismic building code and also before the 1974’s one. These facts show us the great vulnerability of these buildings and so the high value of the vulnerability factor in the risk analysis. We must consider the fact that about 40% of existing buildings need to have deep renovation and seismic improvements in Italy. It’s almost about 12 millions of homes and about 23 millions of people living in them, as told by Italian Engineers Council.
On the exposure side, we may introduce two main considerations. The earthquake hit during the latest days of the summer holiday period and many people from major towns were spending their holidays in their family’s original houses, coming back to their relatives. The earthquake hit during the night, the 6.0 shock was at 3.36 a.m., when all people were sleeping and therefore present in the buildings. So also the exposure factor was high.
For me, as a structural engineer, this is a priority and it was also a priority before this event and before the other recent events of L’Aquila earthquake of 2009 and of Emilia earthquake of 2012. But is this a priority for the country? Obviously now, referring to prime minister’s declarations, it seems to be!
First analysis say that is necessary to invest 2 billion euros for seismic building’s improving each year for the next twenty years in order to increase the building seismic safety. I hope the plan will be really implemented. But only few weeks ago the environmental targets were -and are still today in order to achieve Horizon 2020 and 2030 goals– to promote, through financial tax benefits, the energy retrofit of buildings and more efficient HVAC systems. The main aim is to decrease carbon footprint and to reduce greenhouse gas emission, to control Earth’s global warming, and thus have a positive impact on climate change. These seem to be good wills, but it is only a partial solution to the issue. When we see what happened in Amatrice, we see, for example, that only few days before the earthquake it was possible to have public tax benefits and incentives for a private home owner in order to put an exterior insulation and finishing system, to change windows by others more energy performing or to put a green roof on the family head, i.e. putting more seismic mass on the upper parts of the buildings. All these measures could been applied on an house with no capacity to withstand the seismic impact, for sure also with lower intensity than the one of August 24th, and this according with the law and with public financial help. It’s a big contradiction. And the problem is that it’s real, not a virtual discussion and it’s about our lives.
I think that this situation shows globally the urgent need for decision makers to embrace a comprehensive resilient approach on sustainable development. As defined by U.N. World Conference on Disaster Risk Reduction Preparatory Committee (Geneva U.N. 2014) “The Sustainability of development depends on its ability to prevent new risk creation and the reduction of existing risk”. So the resilience approach means we need to adapt and to flow with ecological system. For sure we have to reduce stressor and human impacts on environment, but the history moment makes the difference and so now we must introduce and use adaptation measures over the only mitigation ones and we cannot forget the impacts of the ecological system on us. A resilient approach simply tells us to make an impacts assessment, a picture of the existing situation, and if we have already done it, we must define priorities and take right actions right now.
Time is our life.